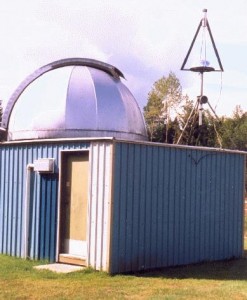 Ed Majden’s observatory is located in Courtenay, B.C. Canada at Longitude 125 deg 00′ 36″W, Latitude 49 deg 40′ 37″N. The main area of research is conducting a program of meteor spectroscopy. In addition, a Sandia Labs all-sky video camera system was installed at this location in order to image bright fireballs. The all-sky camera is mounted on the roof of the observatory next to the dome. This network consists of four cameras, three on Vancouver Island and one in Washington State and is known as the Sandia All-Sky Bolide Detection Network.

As noted above, meteor spectroscopy is the primary program here. 1997 marked the 100th anniversary of the first photographic meteor spectrum. This first spectrum was secured by chance during a routine stellar spectrographic patrol program directed by Dr. Pickering of Harvard College Observatory, in 1897 at Arequipa, Peru. Earlier attempts to visually observe meteor spectra had been carried out by A.S. Herschel in the latter part of the 1800’s. Spectra were observed visually but the results were inconclusive because of the fleeting nature of the meteor phenomenon. S.N. Blazhko of the Moscow Observatory secured three spectra between 1904 and 1907. While at Harvard Observatory in the early 1930’s, the late Dr. Peter M. Millman was asked to do a study of the spectra obtained thus far. Only eight meteor spectra were known up to 1931. Peter Millman started his World List of Meteor Spectra and his life long study of spectra, becoming a world recognized authority.

Ed became interested in meteor spectroscopy in the 1950’s. He was then a member of the Regina Astronomical Society, in Saskatchewan Canada. The Regina group secured two of the early spectra on Dr. Millman’s World List, one in 1955 and the second in 1956. This program was directed by the late John V. Hodges, director of the RAS Observatory. Ed Majden began his own program of meteor spectroscopy in 1972 securing two spectra that year. The spectrographs used by this program are conventional slitless photographic systems. Two of the cameras are modified aero cameras fitted with objective prisms. Another is a 2 1/4 X 2 1/4 Bronica roll film camera with a 75 mm F-2.8 lens using a precision blazed 600 g/mm transmission diffraction grating. All early spectra were secured using objective prisms but in the 1950’s transmission gratings started to be used and they became the preferred method to obtain meteor spectra. Unfortunately, from an amateurs point of view, precision replica transmission gratings are rather expensive. In 1997, experiments were conducted using inexpensive thin film type holographic interference gratings. On the first try a bright fireball spectrum was secured proving that such gratings could be used for meteor spectroscopy. They were not as efficient as a precision replica grating but with the cost being very low amateurs with limited budgets could now participate in this very interesting research field. 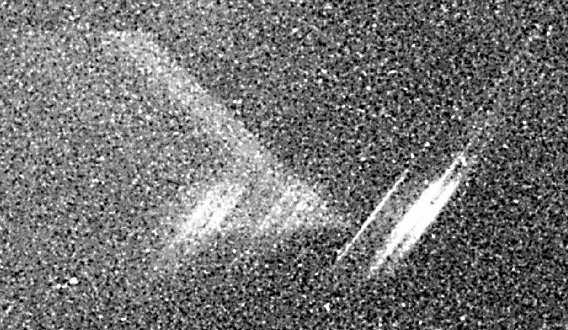 Emission lines of iron, magnesium, and calcium and many others can be identified in this spectrum of a Perseid fireball, taken by Ed Majden in August, 1983 using a surplus aero camera with an f/2.9 – 200 mm focal length lens and an objective prism.

Recent experiments have incuded intensified video work. This Perseid spectrum was secured using a surplus 25mm “astro grade” 2nd generation image intensifier, fitted with a Canon F-1.4 -50 mm focal length lens, and a 600 groove per mm B&L precision blazed replica grating. The intensifier screen was imaged by a Hi8 camcorder and recorded on a standard VHS recorder. The field of view is around 25 degrees. The intensifier was purchased from Stano Components during a sale for $199 USD. Sensitivity is lower than a new device but it still can produce reasonable results at low cost. Stano Components best grade intensifier is called, “weapons grade select,” but the cost is somewhat higher. 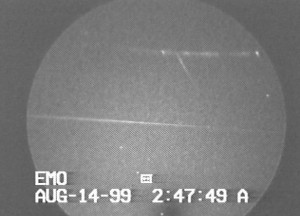 An image intensifier or LLTV video system will record spectra to around +3 magnitude. Resolution is not as good as a photographic system but an intensifier is the only method that can be used to reach faint magnitudes. A grating equipped conventional camera is sensitive to meteors of around -2.0 magnitude and brighter.

Preliminary analysis of this spectrum shows the “forbidden line” of O l at 5577A. This line is the one detached from the main spectrum. It was first identified by Canadian meteor astronomer, Dr. Ian Halliday in 1958. It only appears in meteors entering the earths atmosphere at 40 km/sec and faster. It also appears at a greater height, approximately 10 kms higher than the main spectrum and the radiation is persistent, lasting about one second. The time noted on this spectrum is, P.D.T. Add seven hours for U.T. The long streak, is the spectrum of Jupiter which is off the screen to the right.

The image was digitized by Dr. Robert Hawkes and will be forwarded to Dr. Jiri Borovicka for detailed analysis.

Ed has been elected as an associate member of MIAC, the Meteorites and Impacts Advisory CommitteeÂ  This group tracks Fireball activity over Canada and adjacent US states.

Ed was asked by the American Meteor Society to set up a program of meteor spectroscopy that amateurs could take part in. The main purpose of the American Meteor Society program is to secure high dispersion spectra of bright fireballs brighter than -4 magnitude. Amateurs interested in this work can contact Ed at epmajden@shaw.ca or by writing him at:

These reference papers can be downloaded at the NASA ADS service page by entering the appropriate JRASC references and author, name, and dates, etc.